Who has two thumbs and just scored tickets to Bye Bye Birdie in September? THIS GIRL!

It’s fair to say that I am just a bit excited.

First of all, it’s got a great cast. Sure, you’ve got John Stamos, who I am sure will be an excellent Albert Peterson. But, honestly, I am most excited about Bill Irwin. I love Bill Irwin. I’ve loved him ever since he played The Flying Man, the mute circus performer who wooed Marilyn, on Northern Exposure.* 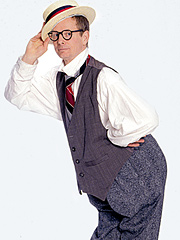 A few years ago, I had the privilege of seeing him and Kathleen Turner in Who’s Afraid of Virginia Woolf?, for which he won a Tony. Most recently, he was one of the only things I liked about Rachel Getting Married.

You might also remember him as the clown on that episode of The Cosby Show where Cliff takes Rudy’s friends out for her birthday.

What most amazes me most about Bill Irwin is the complete and total command he has over his body. It’s just amazing to watch, even when he’s not being a clown or doing acrobatics.  Playing George in Who’s Afraid of Virginia Woolf, he communicated so much to the audience without dialogue – the way he carried himself, his body language, his face – spoke volumes. (And let’s not forget, The Flying Man had entire conversations with Marilyn without speaking a word.)

It’s rare that you see a performer on TV, stage, or movies who really stands out. Bill Irwin stands out. Without even knowing who he was, I remembered him as the clown on The Cosby Show for years. That episode is a permanant part of my childhood. On a mere two episodes of Northern Exposure, he stood out to me as one of the best characters in the series.

The point is, Mr. Irwin is extremely talented, and I can’t wait to see him sing about Ed Sullivan and go beserk when his meals keep getting cleared away before he’s had a chance to eat.

Here’s another clip of him, playing the fool to Karen Ziemba in a Sondheim Celebration at Carnegie Hall. (I couldn’t find the one where he gets dragged off stage, but this is pretty great, too.)

So, there’s one reason why I’m thrilled about Bye Bye Birdie.The other reason? It’s a great show. It’s the show that introduced me to musical theater, back in 1994, when I was in my community theater’s production. I was a chorus girl, and got to wear a poodle skirt and bounce around the stage singing “Going steady! Going steady!” It was a blast. A few years later, my high school put it on. By then, I was behind the scenes, and ran sound for the production. Again: it was a blast.

Despite being wildly popular in regional, community, and high school theater, I think this is an overlooked production. (Can you believe this is the first time it’ll be on Broadway since its debut in 1960?)It’s a very light show – nothing serious, lots of jokes. But if you actually listen to the score, it’s pretty tight. Think about it: “The Telephone Hour,” “Kids”, “A Lot of Livin’ to Do”, “Spanish Rose”, “Talk To Me” “Put On A Happy Face”, “One Boy”, “Hymn for A Sunday Evening” and (my personal fave) “Rosie”, among others.  Plus, the book is hilarious. There’s a reason the show won a slew of Tonys.

My only concern is critics will write Birdie off as”dated.” Well, sure it is. It’s supposed to be. It parodies a very specific time in America. Hopefully I’m wrong. Hopefully critics will love it and Birdie will be the hit of the season.

After all, with all the shit going on in the world right now, this lighthearted, frothy show is  just what America needs.

*For those interested, he did a great interview for American Theater Wing’s Downstage Center podcast  a few years ago. You can find it here.