I’m back from vacation.

Unfortunately (or fortunately), I went from zero to sixty upon returning. Things are very busy at home and at work, so updates may be a little less frequent for the next couple of weeks. (Or I could say screw real life, and update hourly. Probably that won’t happen, though.)

So what happened when I was gone? Forget hurricanes, Barney Frank being awesome (but damn, that was awesome) and a major political figure passing away. You guys, Project Runway is back!

Let me say that again. It’s a joy to type.

Fortunately, we had cable at the beach house, so I was able to keep up with Tim, Heidi, Michael and Nina. I’m not sure I’ve ever been so glad to have a TV show return. When Heidi introduced Tim to the judges, I felt like crying. With Runway gone for so long, and no more episodes of Tim Gunn’s Guide to Style, there was a major hole in my TV watching. (And in my heart. I love Tim so much.) 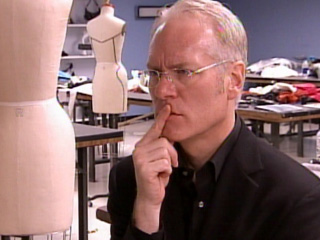 It’s too early for me to pick favorites, but I will say I’m glad that the super creepy Malvin is gone. Also, Logan is hot in a Tim Riggins way, I really want to love Qristyl, despite her weird name spelling, Gordana is fantastic should go far, and Mitchell looks like the long-lost brother of Michael C. Hall.

If you’re like me and can’t get enough Tim Gunn, here’s a great interview with him by the Trib’s Maureen Ryan.

Video of the Day:

In case you missed it, here’s Tim’s Daily Show interview from August 19th.  I love that Jon Stewart is a hardcore Runway fan.