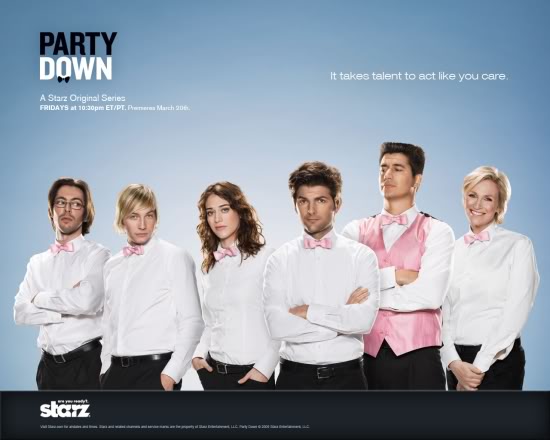 Taking a break from Frasier to write about some current television.

So, last week, I discovered this little-known show called Party Down. It aired earlier this year on Starz. Yes, the movie channel. I don’t know.

Normally, I wouldn’t have even known about it. However, the show runners struck some sort of deal with Netflix. The episodes go live on Netflix instant viewing a day or two after they originally air, so that those of us without Starz (read: most of the viewing population) get to watch in real-time, too. And, luckily, for those of us who just discovered the show, the episodes are still available on Netflix instant viewing.

Party Down is fantastic. But it’s brought to you by the people behind Veronica Mars (Rob Thomas, John Enbom, Dan Etheridge), plus Paul Rudd, so would you really expect any less?

The show follows a group of waiters in LA, who work for the catering company Party Down. They are led by team leader Ron Donald (Ken Marino), who is a Michael Scott type: He’s a former burn out, whose greatest dream in life is to open up a Soup ‘er Crackers – the fastest growing non-coffee non-poultry restaurant chain in the US. Needless to say, things do not go Ron’s way. Ever. He is a terrible team leader, and what’s more, he knows it. Even so, he is determined to become a success.

Each episode chronicles an event –  a block party for a rich neighborhood, a sweet 16 for the daughter of a Hollywood producer, a corporate retreat – in a “behind the scenes” manner. Even though Ron is the team leader, the show is really viewed through the eyes of Henry. The pilot episode has him joining Party Down after 13 unsuccesful years of trying to be an actor. Henry and Ron were friends back in Ron’s partying days, and Ron is more than happy to help out an old friend.

I don’t want to say much more than that, because the season has a lot of fun surprises. I know it’s smack dab in the middle of fall season, but if you get a chance, check out Party Down on Netflix. It’s a half hour show, and the first season is only 10 episodes, so it won’t take too long. If you like what you see, good news: the show’s been renewed for a second season, which should air in April, 2010.

My only regret in watching the show is that I now have to wait six months for a new episode.

Here’s a trailer for the first season.

1 thought on “Down with the party”