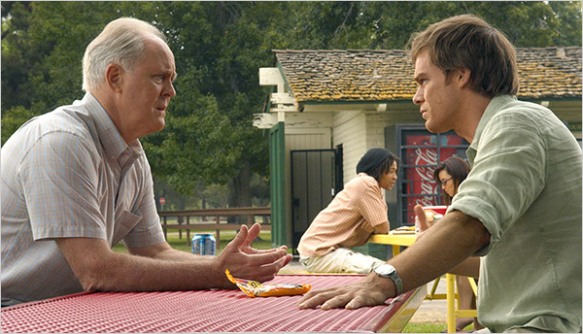 So…I’m not sure if any of you reading this watch Dexter. But I just finished the season 4 finale, and umm….

I knew something was going to happen, like earlier in the season when Lundy died, because Dexter and Rita were finally happy again. But then Trinity was on Dexter’s table, so I figured everything would be okay. But from the moment the show wasn’t over after he dumped the final bag, I knew. What I did NOT know was that Trinity would recreate two scenes: the bathtub killing and little Harrison being “born in blood”, just like Dexter.

Oh, my gosh, guys. I am still creeped out. I have to be at work early tomorrow and need to go to sleep and I am SO CREEPED OUT.

Also, I feel bad for Julie Benz. What’s she going to do now? There’s a recession, dammit. I know a lot of people were getting sick of Rita, and I can see that, but I always liked her, and I really liked seeing Dexter open up more around her. Of course, I guess that’s the whole point – he was becoming too soft. And I get that, and from a storytelling point of view, it’s brilliant. But, they just killed off a major character! And it’s not even a Joss Whedon show! What are you doing to me, Dexter writers??

And…um…what’s going to happen next season?

Ok, I’ve got to watch the Trinity/Dexter final scene again. It’s going to work on so many levels now.

Also, can we just call it now: John Lithgow wins the Emmy? (In a perfect world, Jennifer Carpenter would also win the Emmy – she has been stellar this year. Absolutely stellar.)