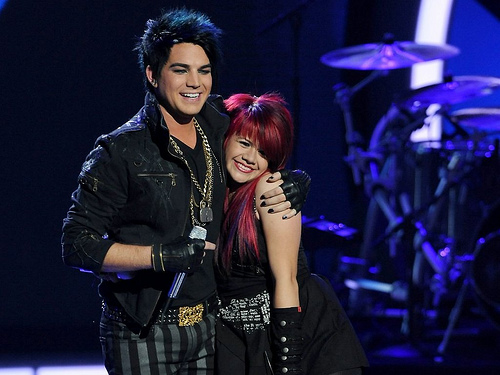 Next week, I’m doing something I never in a million years thought I’d do.

No, your computer didn’t malfunction; yes, you read that correctly.

If someone had told me six months ago I’d be joining the legions of crazy American Idol fans who actually shell out money for the cheesy summer tour, I would have laughed in their face.

Let’s think about this, really.  Why go? It’s cheesy. It’s undoubtedly filled with screaming teenagers who LUV Kris Allen, making hearts with their hands in hopes Danny Gokey will see them and reciprocate. Plus, you have to put up with the entire top 10 – which includes the dreadful Scott McIntyre, boring Michael Sarver, and crazy, tattooed Megan Joy.

There is also Adam Lambert. Which is why we’re going. (We’re actually calling it “The Adam Lambert Show”, not “The Idols Live Tour.”)

Truth be told, I’m pretty excited. If anything, it’ll be a big spectacle, which is always fun to see.

But I’m also nervous, nervous that the evening will be ruined by screaming tweens holding signs and crying at the sight of precious Danny fucking Gokey. (Who, I hear, reprises his [admittedly pretty great] version of Michael Jackson’s “PYT.” Too soon?)

The seats are complete nosebleeds, as my fellow concert-goers and I didn’t make the commitment until tickets had been on sale for a few weeks. But it should still be fun. Right?

If nothing else, Adam and Allison will both be there, being adorable. And hopefully we’ll get to see this again, which was one of my favorite moments of the season.

No offense to Kris Allen, who I admit is talented in his own, quiet way, but how freaking awesome would an Adam/Allison finale have been?

Full report to follow, assuming I make it back intact.