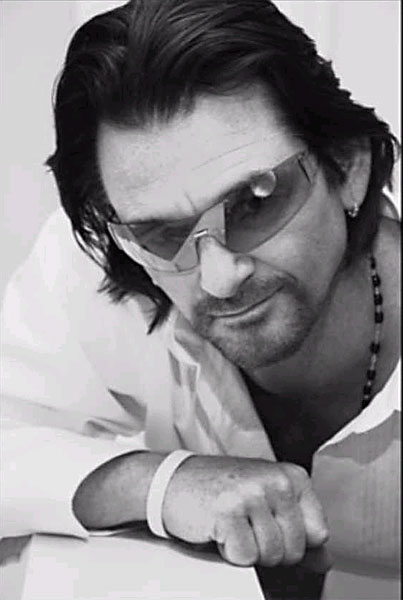 Paul Hewson (also known as Bono) turns 50 today. This is hard to believe – not only because it means that U2 has been around for 30 years, but also because…Bono doesn’t seem 50. He doesn’t act 50. He doesn’t act 40. He still has the energy of a 25 year old, and the dreams and  ambition of a wide-eyed kid.

I could write a lot about what U2 and Bono have meant to me over the years. (Actually, wait, I have) I’ve loved them since I was 12, and will love them forever.  But I’m not the only one. U2 has meant many different things to many people. For me, they are the closest thing I have to religion. Seeing them live is like going to church. It fills me up, it makes me feel good about myself and the world, gives me faith in people. (I know, that’s weird. Unless you’ve seen them live. Then you know.)

I have lots of memories of U2 over the years – seeing them right after September 11th, seeing them live for the first time at Popmart, when my Mom thought the song was “Angel with a Hard On” instead of “Angel of Harlem,” watching Bono break down after singing “Sometimes You Can’t Make It On Your Own”. But what really sticks out (and I’m actually getting teary writing this) is when I first heard the album All That  You Can’t Leave Behind and the song “Walk On.” I was a sophomore in college, and very unhappy. I didn’t know why I was so sad, and felt like no one understood how I was feeling. How could they, if I didn’t even know?

I walked down to the local record store at midnight the eve of the release, stood outside with the few other devotees, and purchased the album. Got back to my room, popped it in my computer, and started listening. By the time “Walk On” came up (the fourth track), I was already in love. And then, Bono started singing about the daylight being a long way off, and what I got no one can steal, and how I just have keep walking, keep breathing, keep being.  He understood. No one else understood, but somehow, Bono did.

Flash forward a year. I’m home for the summer, after leaving school the winter before. In a few months, I’ll go to Illinois and have some of the happiest years of my life. I’ll learn how to make movies while also making lifelong friends. But first, I saw U2 live for the second time, with my best friend, Jenn. We sat in the second tier, and at the end of the show, Edge played the familiar opening notes to “Walk On.” I took a breath. Jenn looked over at me, and silently took my hand. She didn’t let go until the song was over.

10 thoughts on “Learning how to walk”