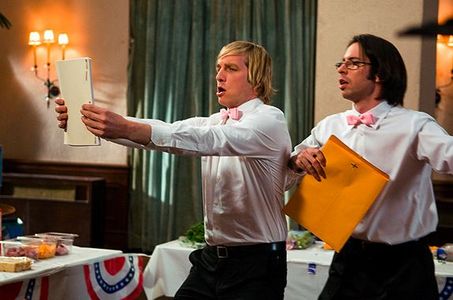 Party Down, I miss you so much I still haven't watched the last two episodes.

I don’t know about you all, but this weather is really getting to me. Normally I don’t mind the summer – like Rory Gilmore I tend to run cold, so the summertime is one of the only times of the year I’m actually comfortable. Until now.

Between the oppressive heat and about a month of being out of town or having house guests, I have been completely ignoring my duties as a pop culture/television junkie. When I’m home, I can’t be bothered to watch or read something new – instead it’s been trashy or adolescent books and TV on DVD. 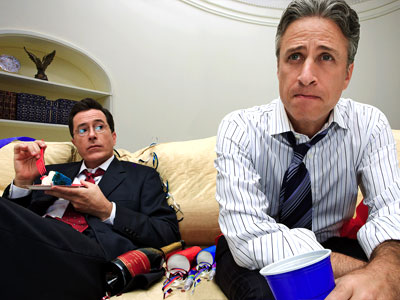 I’ve completely abandoned my fake news boys, Jon Stewart and Stephen Colbert. It started innocently enough – miss a few episodes there, a few episodes there. Before I knew it, weeks had gone by and my DVR was backlogged with episodes. So then I started going through them, but listening to news 4 weeks old is, well, kind of pointless. And only made me feel worse about getting far behind. So I deleted them all and started fresh. And then didn’t watch for three more weeks, and now they’re on hiatus.

I’ve also abandoned the last two episodes of Party Down  though I suspect that’s because I know they are truly the LAST TWO episodes. Stupid Starz. For those unaware of the brilliance of this show, check it out on Netflix instant queue. Just don’t tell me what happens at the end of season two. (Though I’ve heard rumblings of Constance returning, which can only be awesome.)

Speaking of Netflix, forget it. I only just watched the Broadway documentary that had been sitting atop my DVD player for a month. The Informant! still sits there untouched. 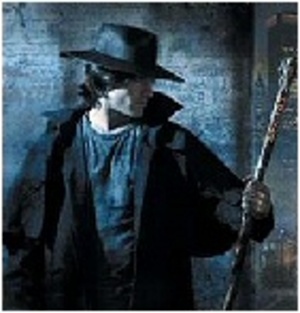 That thing he's holding is called a blasting rod. This never fails to make me giggle, because I am very immature.

Don’t get me started on books. Books, books, books, I have so many books to read! A few months ago, I made the huge commitment (and possible mistake) of buying all the books in the Harry Dresden series. Yeah, I know, but stay with me: It was a nostalgia thing. I used to read them in college, ok? And awhile back, I got an iTunes gift certificate, which I might have used to get the first two audiobooks. Which might have led to an expensive day at Barnes and Noble. So now, not only do I have 10 books to get through, I also have, you know, regular books sitting untouched on my bookshelf. Don’t worry guys, I’m coming!

Pop culture ruts can be hard to break through. My problem is I get really stuck on one thing and have a difficult time getting unstuck. But it’s just like everything else in life: you don’t want to do it, but once you go through the motions, it’s not a big deal. And you’re glad you made the effort.

Emmy nominees(!!) Kyle and Connie, aka Coach and Mrs. Coach

Once I get unstuck, what should I be looking at this summer? Besides Friday Night Lights, which I would never abandon because it’s AWESOME. (Speaking of which, can we all give a big internet cheer to Connie Britton and Kyle Chandler for their very, very VERY overdue Emmy nominations?) I haven’t been to see a movie since Alice in Wonderland. Any suggestions? I hear good things about The Kids are All Right. Anything else?

Video of the Day: Farewell, Party Down. Here’s one of my favorite scenes from season 1.