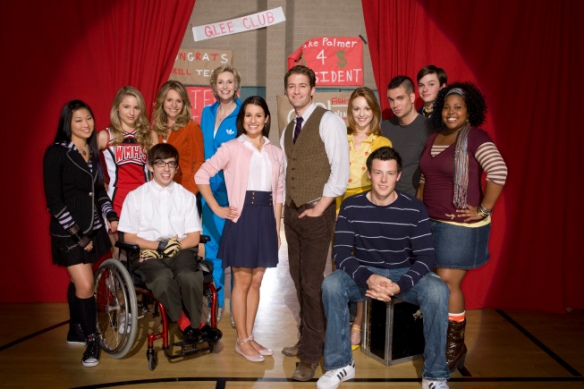 Before I begin, a few things: First, I’ve not seen every show out there. These are just some of my favorite moments. I know, for instance, that Ally McBeal was chock-full of musical performances. Unfortunately, I’ve never seen it. Ditto for the first four seasons of American Idol. Second, by musical moments, I do not mean montages. I mean characters actually singing, or music being used effectively in a scene. (But there are a few exceptions for truly outstanding montages that could not be ignored.) Don’t get me wrong, I LOVE a musical montage. But the list is long enough already; if I included every musical montage I loved, I’d be writing this entry forever.

Ready? Okay, here we go, in no particular order.

“I’ll be  a fool for you.”
Friends – Chandler and Phoebe sing “Endless Love”

Believe it or not, Chandler is singing about Janice. Friends had a lot of really great tags, and this is definitely in the top 10. Who can resist Chandler’s emotional falsetto outburst? We’ve all been there, man.

I don’t know that anything needs to be said. The clip pretty much speaks for itself, huh? Also, this is only my second favorite musical moment on Cheers. My actual favorite?

“And your chief export is chrome.”
Cheers, Coach teaches Sam about Albania

Y’all, this song gets stuck in my head ALL THE TIME. Those are the only things I know about Albania. And they say TV isn’t educational.

“You ride up my thighs.”
Six Feet Under, Claire serenades her pantyhose

Six Feet Under had a lot of musical fantasy numbers, and they’re all great. This one holds a special place in my heart because the episode aired the year I started working in an office. I feel ya, Claire. I can’t wear fancy work clothes, either. Thank goodness for business casual.

Sort of like “Smelly Cat” (only not really), “Soft Kitty” has become a running joke on The Big Bang Theory. You can see how it started here. It’s always funny to me, but this particular instance made the list because of how happy Sheldon is when he finally joins in on the round. For those who don’t watch the show, you should (Mondays at 9:30 on CBS), and also, Sheldon and Penny together = instant comedy gold.

Kristen Chenoweth singing a torch song and dancing in time with a floor waxer – it doesn’t get any better.

Not only is this hilariously inappropriate for the work place, Ricky Gervais is actually a really good singer. Who knew?

“Why oh why can’t I?”
Scrubs, Ted’s Band sings “Somewhere Over the Rainbow”

Hey, remember when this show was good? Before JD had a kid and everything went to crap? (Sorry.) Anyway, this is one of those montage exceptions, because it’s just so well done. Ted’s band is one of my favorite things about Scrubs, and this is just one example of their awesomeness. I believe this was the show’s 100th episode, and was directed by Zach Braff. Sadly, I do not watch the show anymore (see above). But when this show was good, it was really good. Bill Lawrence made an art out of the “voiceover ending montage wrapping everything up with a song you didn’t know you loved until just now” maneuver. Staying with Scrubs, next on the list is….

Hee. That is all. Seriously, though, Scrubs has a lot of GREAT musical moments, and it was hard to pick just two. For more on Ted’s band, check out this compilation.

“And in who’s arms you’re gonna be…”
Queer As Folk, Justin’s prom

There have been many shows featuring high school dances. This one has them all beat. You probably have to have seen the rest of the season to get the significance, but c’mon, look how happy they are. Plus, those are some slick moves. It’s Justin’s fantasy come true. (Just don’t think about what happens when they leave.)

“We do live here now.”
Studio 60 on the Sunset Strip, New Orleans jazz players on The Christmas Show

Does anyone else remember the year of Studio 60? So aggravating. If you all were following the show, you know what I mean. It started out so strong, and then took such a dive. For me, the most heartbreaking part was that Matthew Perry gave the performance of a lifetime as writer Matt Albie. Say what you will about the show as a whole – it had its problems, and some pretty low lows. Say what you will about Aaron Sorkin preaching to his audience. I know, I know, okay? But, as obvious as the above clip is, it’s still incredibly moving. Remember, the show started airing in 2006, so Hurricane Katrina was still a relatively new thing, and this was pretty darn affective.

“Toby? I’d like to come along.”
The West Wing, Toby organizes a funeral for a homeless vet.

I haven’t watched all of The West Wing yet, but from what I’ve seen, this remains my favorite episode. It’s the one that got me to love Toby Zeigler. Again, say what you will about Aaron Sorkin and his agenda, the guy knows how to write a Christmas episode. If you haven’t seen this one (from season one, “In Excelsis Deo”, do yourself a favor and watch. If this clip didn’t make you cry, Mrs. Landingham’s speech about her boys will.

The best thing about this was that it was completely unexpected, even for 30 Rock. It’s just silly, and random, and that’s why I love it.

I couldn’t very well write a Glee-inspired post and not include something from the show. This was a hard decision, because almost every episode has a great musical moment. I picked this one because, for some reason, I absolutely love it when Matthew Morrison raps. I don’t know why; I’m not generally a fan of rap. It must be Morrison’s innate charm. Plus, whether it’s true or not, everyone looks like they’re having a great time.

“His eyes are beady!”
Buffy, Once More With Feeling

You thought I forgot, didn’t you? How could I? Unfortunately, there are virtually no clips of this on the internet, but you can safely assume the entirety of “Once More With Feeling” is among my favorite musical moments. How could it not be?

“I’ll be so happy loving you.”
Full House, Jesse sings “Forever” to Rebecca at their wedding.

Don’t pretend like you don’t know (and love) the song. Admit it, you were just singing along. Man. What a beautiful TV couple. If those two had been together in real life, they would’ve had gorgeous children.

“We are all vulnerable. And we will all at some point in our lives fall.”
Friday Night Lights, Coach Taylor’s  prayer for Jason Street

Of all the shows I’ve ever watched (and that’s a LOT), not one uses music better than Friday Night Lights. Okay, that’s an extreme statement. But seriously, the music people on FNL are incredible. A lot of their stuff (including that song, called “Remember Me As a Time of Day”), is by Explosions in the Sky. But not all of it. I can’t explain it, but somehow, the use of music on FNL enriches the show like, ten-fold. More than most shows. Anyway, enough of that. This is just one example of how expertly they incorporate music into their episodes. And, BTW, if you aren’t watching Friday Night Lights, you need to be. Go and buy the first three seasons on DVD right now. Seriously – stop reading this blog, drive to the store, or go to Amazon.com, and get them.

Speaking of knowing how to use music – the Gilmore people did a pretty great job as well. There’s not a lot to say about this clip – it’s sweet, and, years after seeing it for the first time, STILL gives me butterflies. And from that we go to the other extreme…

“But above all, I wish you love.”
Gilmore Girls, Lorelai sings karaoke.

I know, guys, but I had to put it on here. It’s a great musical moment! I’ll wait for you to stop crying. Just remember, they do get back together in the end. At least, we’re supposed to think they do. Damn you, Amy Sherman-Palladino. Damn you! (Wow, I thought I was over that. Guess not.)

“So I had to get down and bust a tasty move.”
How I Met Your Mother, “Let’s Go To the Mall”

Y’all didn’t think I’d make a list and not include this, right? I can’t leave out Canadian pop sensation Robin Sparkles! Speaking of which…

“I’m on the pill now…”
How I Met Your Mother, “Sandcastles In the Sand”

So, I’m about to make a huge interweb confession that will probably lead to a revolt against this blog: I like this song better. Don’t get me wrong – “Let’s Go to the Mall” is hilarious, and I love it. But Sandcastles in the Sand is the superior song. It’s smarter – they’re parodying a love ballad, and it’s still hilarious, but it’s also…oddly sort of sweet, and captures the feel of the teen pop song. Plus, I love that animated car driving on the map from Alberta to Ontario.

“Forever on the dance floor.”
The Office, Pam and Jim’s wedding

So, this could also create some controversy, but I loved this montage. I bawled like a baby when I first watched it. And pretty much every time I’ve seen it since. People were mad that it was an homage to the YouTube sensation that came out earlier this year. Yes, that’s exactly what it is. And, in my mind, it was exactly the right thing to do. Think about it: of COURSE Michael, Andy, Phyllis, Kelly and the others would see that and want to recreate it. Also, I love how everyone danced down the aisle exactly in character. For me, the aisle dance was a big tribute to these characters we’ve gotten to know over the past six seasons. So yes, it was a  blatant ripoff, but I’m okay with that. It worked for me.

This remains one of the funniest things I’ve ever seen, no matter how many time I see it.

Okay, so I lied. There is an order. These last two clips are my favorite musical moments on TV to date. And here they are:

Y’all, how did he not win with that? I still don’t understand. No one will ever top that. Ever. It cannot be topped.

“I will kick your prom king ass.”
The Colbert Report, Stephen and John Legend battle over lady liberty.

So good. Yes, there’s been a lot of music on Colbert, and sure, some have been more clever, but I just love this. It never gets old.

And there you have it. Are you still with me? If so, thanks. If not, well, I don’t blame you. This list is just a bit long. Even so, I’m sure there are things I missed. So, tell me, what are some of your favorite TV musical moments?