Ladies and gentlemen, the wait is over. Your prayers have been answered. The long-anticipated blog post is finally here. That’s right, it’s Part 3 of The Great Frasier Rewatch! Don’t know what I’m talking about? Go here and here to read parts 1 and 2. Excited? Me too, let’s get started!

Season 3
Okay, hold on. Before I begin, let me just say that season 3 has a lot of great episodes, but I only picked a couple for this list. I’ll list some notable mentions at the end. Okay. Now, for reals, the list.

Martin Does It His Way: This is one I actually remembered from my youth. Frasier’s aunt passes away, and leaves all of the funeral arrangements up to Frasier. He is also responsible for delivering the eulogy. Meanwhile, poor Niles is tasked with disposing of her remains. The problem? She was an unhappy, miserable woman whom all three Crane men disliked. (Note: though it’s never said, I think the audience is supposed to assume the aunt is related to Frasier’s mother.) Her death leads to a discussion among the Crane men and Daphne about not squandering the time you have, which prompts Daphne to reveal Martin’s deep, dark secret: He used to write songs. Sort of. He wrote the lyrics, and the melodies were all in his head. He wanted to send them to Frank Sinatra, in hopes ole’ Blue Eyes would sing one. After some prompting, Frasier and Niles persuade Martin to let them help him write the music to one of the tunes, “She’s Such a Groovy Lady.” Martin sends it off to Frank’s people. Meanwhile, Frasier struggles to write an honest eulogy for a horrible person, and Niles tries to find a place to scatter his aunt’s ashes. The episode’s climax takes place at the funeral (after Martin’s song has been rejected). Needless to say, Frasier finally comes up with a fitting tribute: 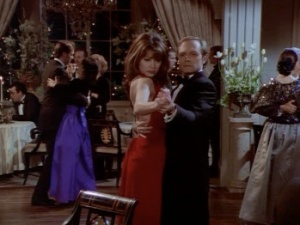 Moon Dance: Obviously. If you’re reading this, I assume you know the show, and especially this episode. But, in case you don’t: After learning Maris is dating every high society man in Seattle, Niles decides to go on his first date, post-separation. He invites a fellow socialite to the Snow Ball. And then realizes he can’t dance. Daphne offers to give him lessons. When Niles’ date cancels, he impulsively asks Daphne, who says yes. And in case you don’t remember what happens…

In addition to the great Niles/Daphne plot, there are also several funny Martin/Niles exchanges, including a bit about coroner’s bars (not to be confused with corner bars) and toasters. And fun fact: This was the first episode directed by Kelsey Grammer. Pretty impressive, huh?

*Other season 3 notables: Kisses Sweeter than Wine, The Last Time I Saw Maris, Look Before You Leap.

Season 4
Mixed Doubles: After learning that Daphne broke up with Joe, Niles decides to ask her out. Frasier convinces him to sleep on it; meanwhile, Daphne goes to a bar with Roz and meets a new man, who just happens to be Niles 2.0. Niles finds out, is furious with Frasier, and asks Roz to help him meet someone new. She does, and he does. Just when it looks like he could be happy, the brothers spot Daphne’s new beau canoodling with Niles’ new lady. The episode ends with Niles and Daphne lamenting over their love lives, in what I consider to be one of the best written scenes in the entire series. (Really, this scene is why the episode makes my list.)

Death and the Dog: One of the best written episodes of the series, hands down. It’s not the funniest, or the farciest (is that a word?) It’s a very brave episode.  Eddie the dog is depressed. He won’t play with any of his favorite toys, and spends his days lying with his head down in sorrow. Finally, Martin decides to consult a doggie psychiatrist.  The psychiatrist tells the family that Eddie seems to be healthy, and suggests that he is picking up a vibe from a human. This leads to our gang having a discussion about the state of their lives, their fears, and whether or not they are actually happy.

To Kill a Talking Bird: One of the finest farces Frasier ever did, To Kill a Talking Bird revolves around Niles throwing a party for his new neighbors at The Montana. In true Frasier form, the party goes awry when Niles’ new pet bird becomes affixed to his head. Yes, you heard me right: the bird attaches itself to Niles’ head and won’t get off. I think that’s really all I need to say about that. The whole thing is hilarious. Fun fact I recently learned: David Hyde Pierce had a bad case of the flu the week they were filming. But you’d never know from his performance that he was dreadfully ill. 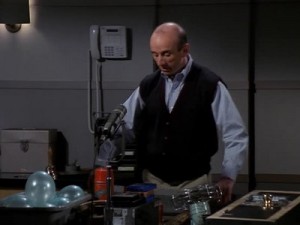 Ham Radio: I’ve already written about this episode, but it obviously had to be on the list. This might actually be my favorite episode of all time. It’s certainly the funniest. If you haven’t seen it, run, do not walk, here to watch.

And that’s it for part three. Two other notable season 4 episodes include Daphne Hates Sherry, a Tennessee Williams masterpiece, as well as The Two Mrs. Cranes, which has my heart if only for the moon crane jokes.